Foreword: This was the first true update on the actual cycling component of our trip. The pictures are awful. Oh god, I described a beer as “foresty”? What does that even mean? Did I mean piney? I think this is going to be more a reflection on my writing than on our actual trip. Yikes. Anyways, Burnaby was a fine, green, lush, and suburban way to start our trip. I guess I prefer BC to Ontario – is that blasphemous? Looking back, I feel we were so naive for what was in store. Starting in BC really pushed us hard physically which made the rest of the trip seem far less daunting. I can’t believe we didn’t know how to change tires when we set sail (we had a sense, but hadn’t actually done it). It’s just very typical of me, figuring things out as I go. Not so typical of John though. I just wish he had actually fit that Powerpuff Girls helmet. I wonder how long it would have lasted. Sadly, it appears as though that Heidi’s Cafe has closed down, or at least changed names. Oh, bother.

So it has begun… Our epic quest across this beautiful land.

It started off crappy because everything John touches breaks. I guess he just doesn’t know to treat things with tenderness. This ended up being a blessing in disguise though because we now know how to change tires, take wheels off, change break pads, etc. John apparently has a real knack for messing things up. Oh, bother.

As we finally exited the terminal after an hour and a half of repairs, we were struck by how much more awesome British Columbia is than southern Ontario. Everything is so fresh, so green, and almost every road has dedicated cycling lanes. In Scarborough it is dangerous to cycle on the shoulders of main roads in because of those god forsaken potholes. In British Columbia, everything is pristine. Even the traffic lights change when you press the buttons… Imagine that!

As we cycled forward to Burnaby, we stopped off at this remarkable restaurant called Heidi’s Cafe for lunch. This establishment had a really spunky, charismatic waitress who frowned when we told her we were from Toronto and who told us, “even the pigeons in Toronto have lost all hope” and went on about a story about how in BC, when you try and kick pigeons they actually try and fly away; in Toronto if you try and kick a pigeon, the pigeon gets hurt. The place got a great Yelp review.

John is an idiot and forgot his helmet and so had to buy a new one in Vancouver (we tried to find a Power Puffs Girls one, or one with Hot Wheels or a dragon on it but they were too small). I’m just finishing a great beer from Kelowna BC. It’s called “Thirsty Beaver Amber Ale” and has a really unique, foresty flavour. I’m going to have a few beers from each province we visit in the quest for the greatest Canadian beer.

John has an amazingly awesome souvenir for our mutual coworker Joe. He will be very happy. I’m sure Joe will cherish it for years to come, and probably ask to be buried with it when he dies. Ask him about it.

I’m tired as all hell. I’m probably not making much sense anymore. John is really starting to cactus.

I can’t stop touching my head. 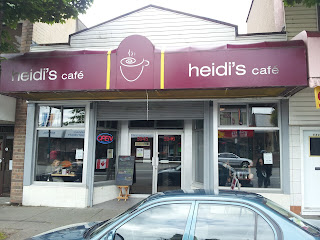 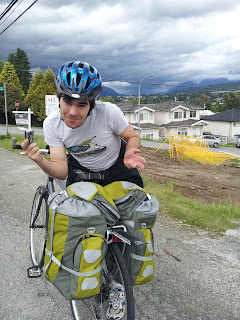 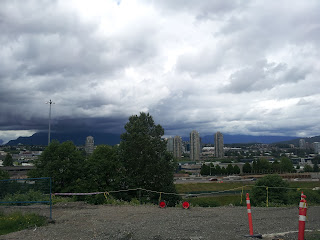 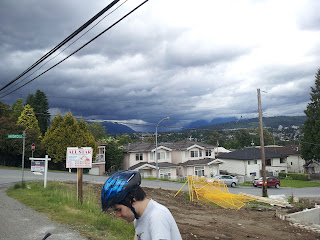 Seriously what was I thinking when I took this?