Only after a 15 hour flight to Taipei followed by flying another 4 and a half hours, we landed in the grand lion city of Singapore! A little caught off guard by the heat and humidity, it was a great help that my uncle was at the airport to pick us up and take us to his home. How does one even try to navigate in a completely new place, disoriented and exhausted?

We were determined to not let jet lag win this battle. Only staying a few days in Singapore, we didn’t want to screw ourselves over for the whole time of our stay. We pushed on to stay up until 8 or 9pm, on the same day of our arrival to set our body clocks straight. Ambitious as we were, decided to head downtown to checkout what we have gotten ourselves into.

We were dropped of at Orchard Road, a good start to Singapore as tourist. My prediction was not too far off when I assumed that all of Singapore is air conditioned. Orchard Road is pretty much a giant network of shopping malls were you can buy anything your heart desires. The air conditioning pumps down large outdoor escalators as you ride them up, effectively cooling the streets. Walking around aimlessly, we felt like we were characters in a video game. You know when you first explore an area, walking in and out of each building, circling around realizing you’re back to where you started?

Well we did end up exactly where we began, but none the less got a good dinner in us. Kicking our culinary experience off right.

Once about 5 pm hit, I entered zombie mode and just wanted to get back and sleep. Matti had to deal with full on grumpy Sara as we both try to figure the transit system for the first time. It took asking quite a few different people, but we made it and actually Singapore’s MRT is actually really great, quick and efficient.

The next morning we experienced our first Matti moment of the trip. Matti moment number 1: Matti, essentially, threw his coffee at the interior of the elevator, getting coffee on the floor, doors, walls, and probably the ceiling. He had a joyous time cleaning it up.

Since the first coffee was used for interior painting, he grabbed another, this time in a bag. A to-go snack for our journey to China Town. 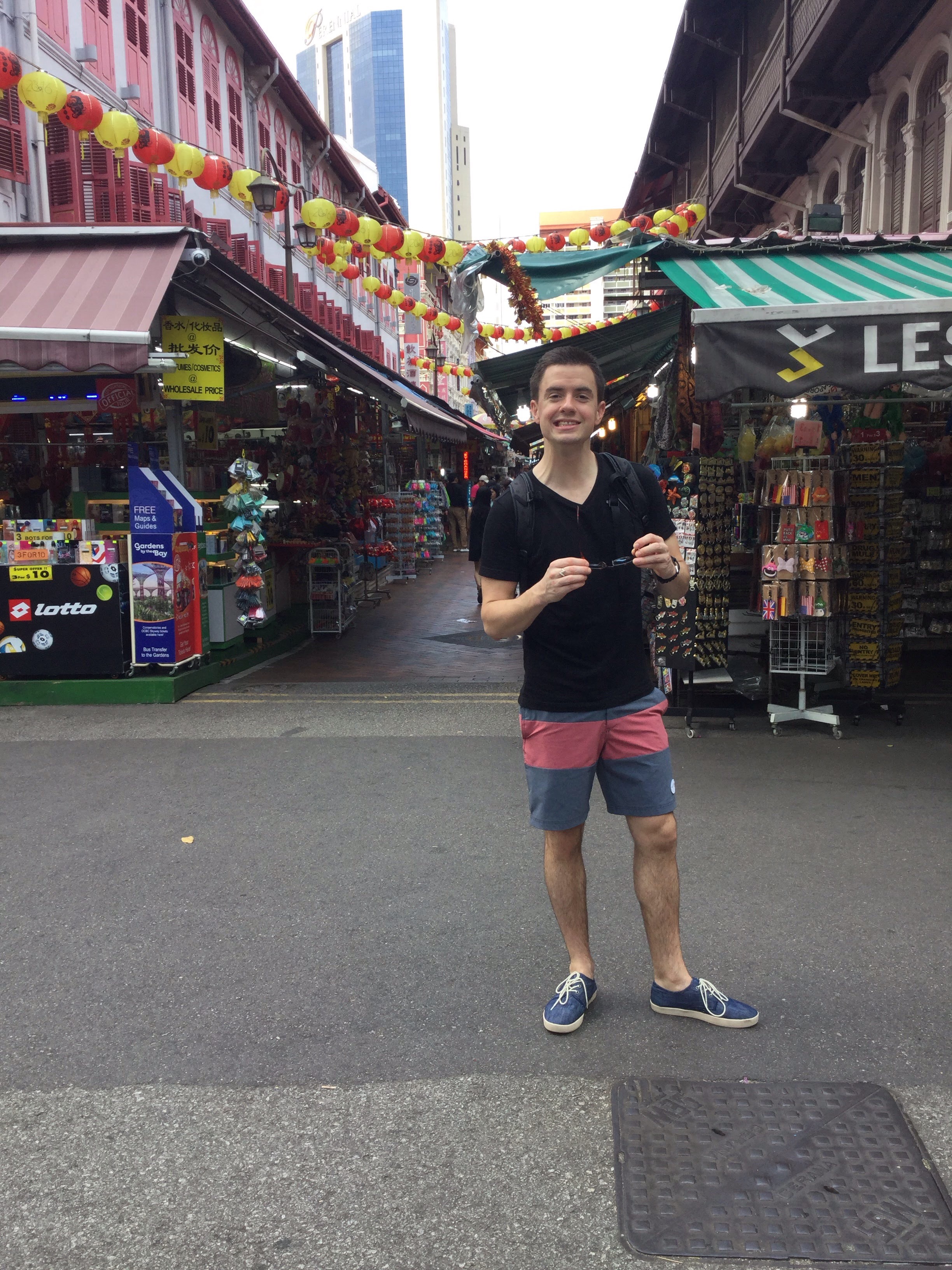 China Town is definitely a must see when you’re in the city. It is a vibrant, bustling place with lots of people, food, and fun little shops and stalls. Spanning a handful of streets, it’s easy to get lost among the excitement. On Smith Street, there is a very large hawker Center that is home to The Good Beer Company, which we read about in the New York Times while doing laundry back at home. In our search, we accidentally stumbled onto some roof top. It turned into a blessing because we got a cool view of not only China Town, but the skyline.

Searching for this one stall gave us a feel for what it’s like to compete in The Amazing Race. There are so many stalls in these centers and they all look the same and there are all these different sections, which also all look the same. I felt like we were running around searching for that red and yellow flag. Sad conclusion, the stall was closed until the evening, so we had to come back later.

No worries, so much more to see! Right behind the hawker centre is the Buddha Tooth Relic Temple. It is free and open to the public to walk through. Dress modestly though, if your shoulders or knees are exposed you will be asked to put on a sarong and shawl. There are ones available for you to borrow that they are more than happy to share. 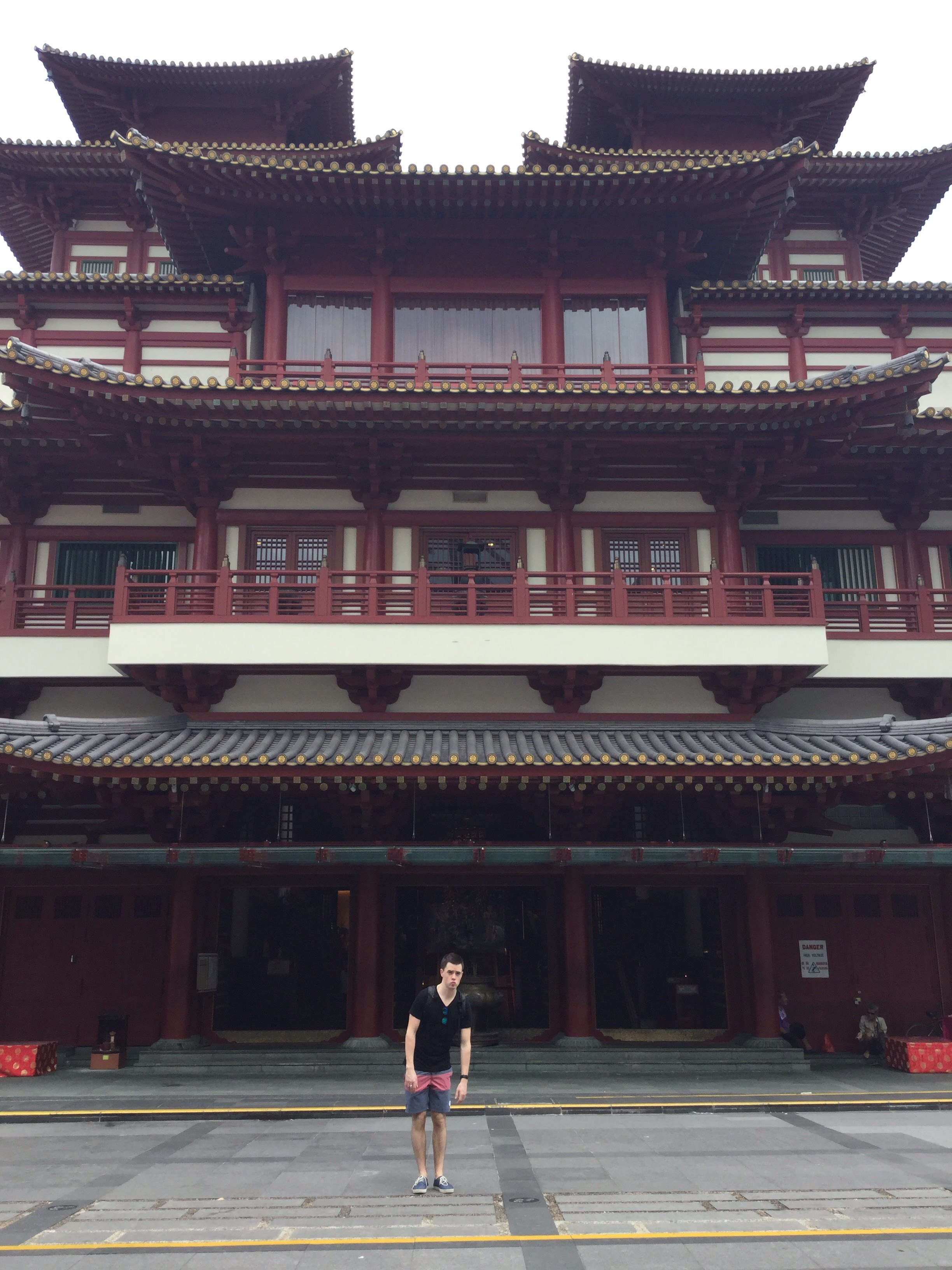 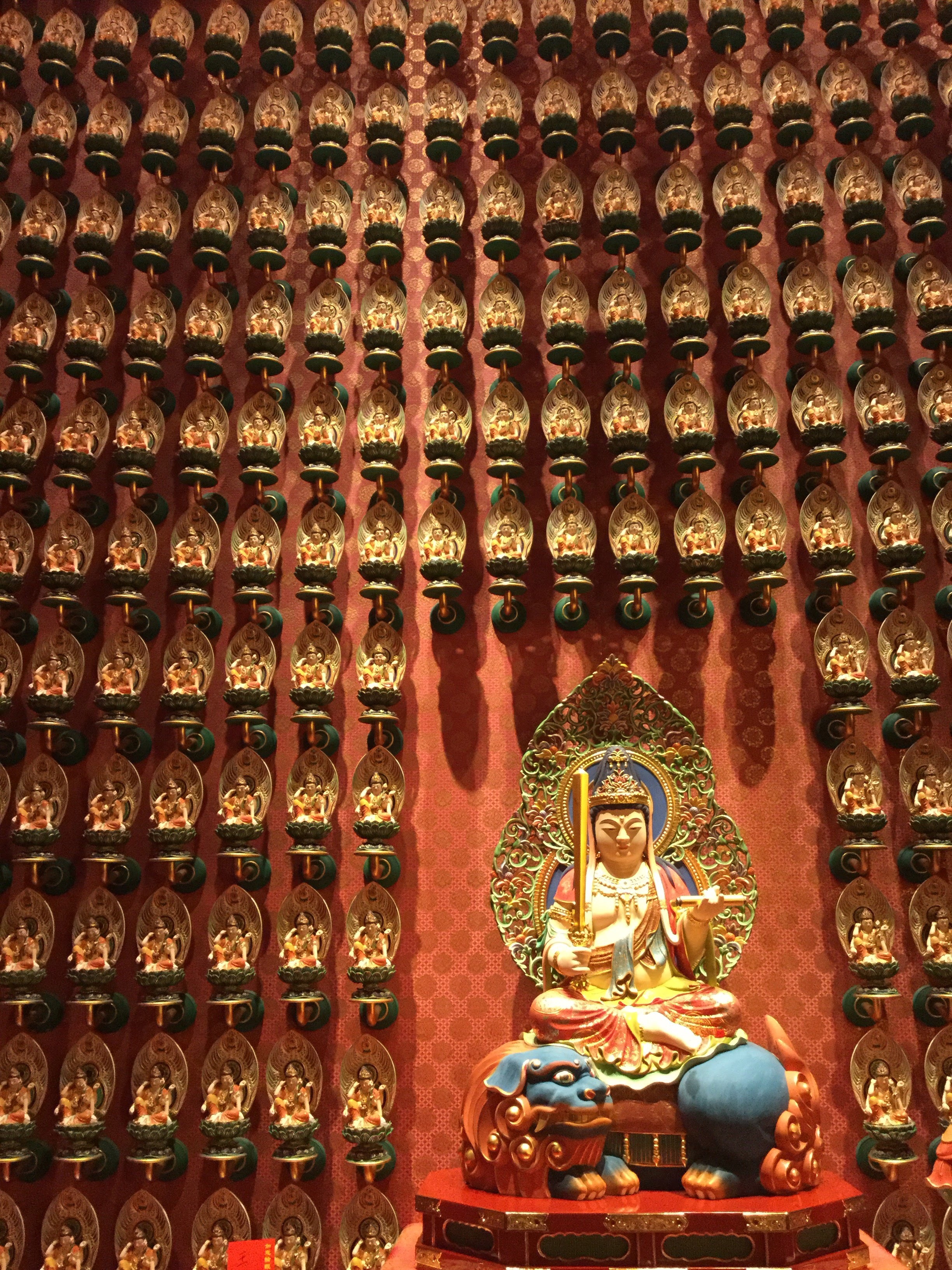 From China Town, we took a walk to Marina Bay. There are so many things to do around the bay. Just walking along the boardwalk is an activity in use itself. You get a beautiful view of the skyline overlooking the bay.

By the bay you can visits the casino or take a boat ride around the water. We took a walk through the Marina Bay Shoppes. We thought it was just going to be a short cut, but no no no. It’s a massive shopping mall with shops from Versace, to Prada, to Louis Vuitton. There is a freaaking river with gondola rides in the mall. Yes, in the mall. Proof below.

Also the Art and Science Museum is shaped like a blooming onion. Do you think the Singaporean architects are aware of the American influence?

The Marina Bay Gardens is another must-see while you’re visiting Singapore. We made it there after about a 40 minute walk from China Town and the first spot we visited were the two domes containing the Flower Garden and Cloud Forest. This is a big tourist attraction for the garden being a paid attraction of the garden. It cost about $25 per person to visit both exhibits, but completely worth it. You’ll be in awe, like we were. 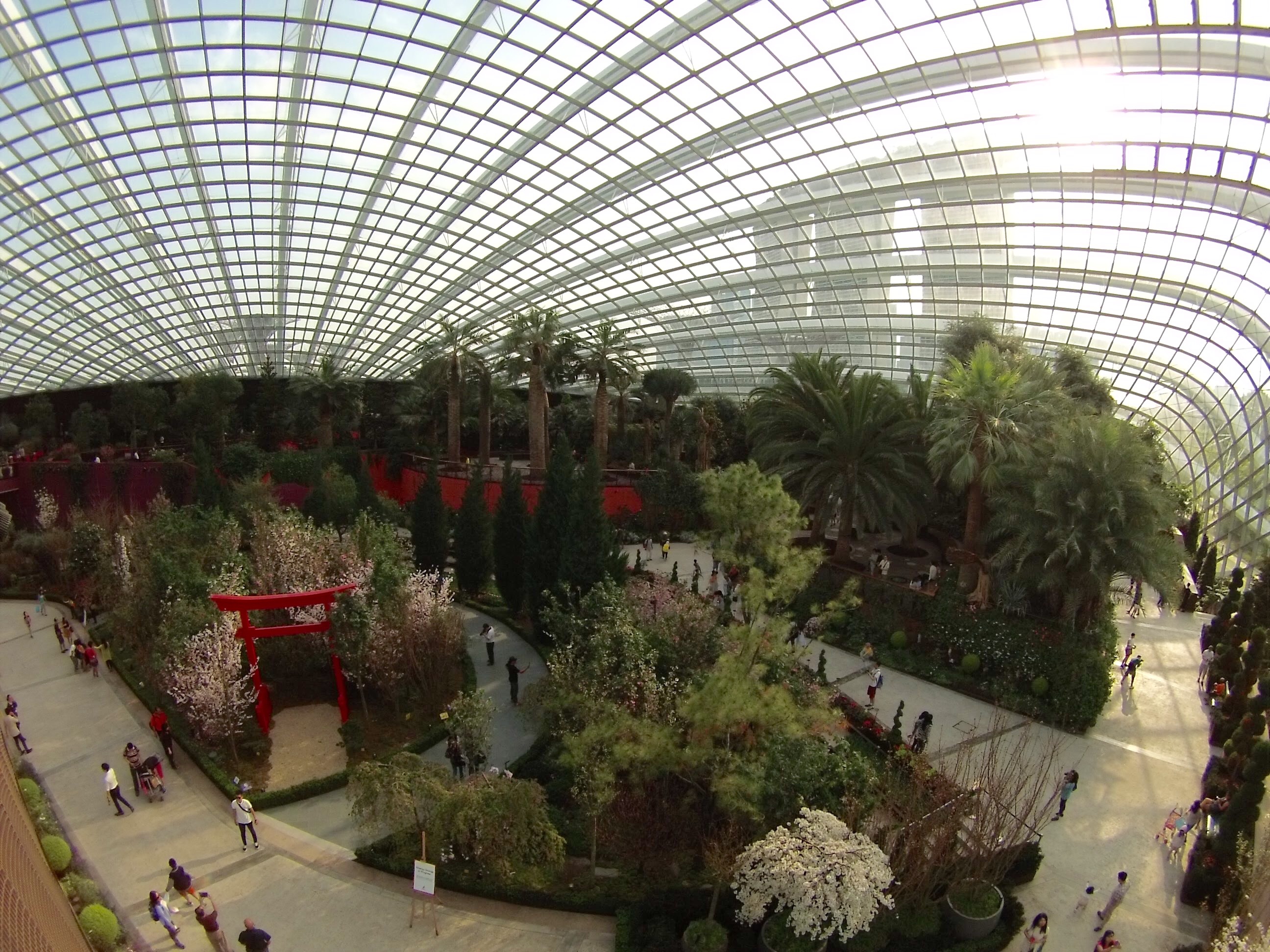 Flower Garden is a completely self contained ecosystem of plants and flowers from all over the world. From giant prehistoric plants to olive trees of Greece. It is a very fascinating place. 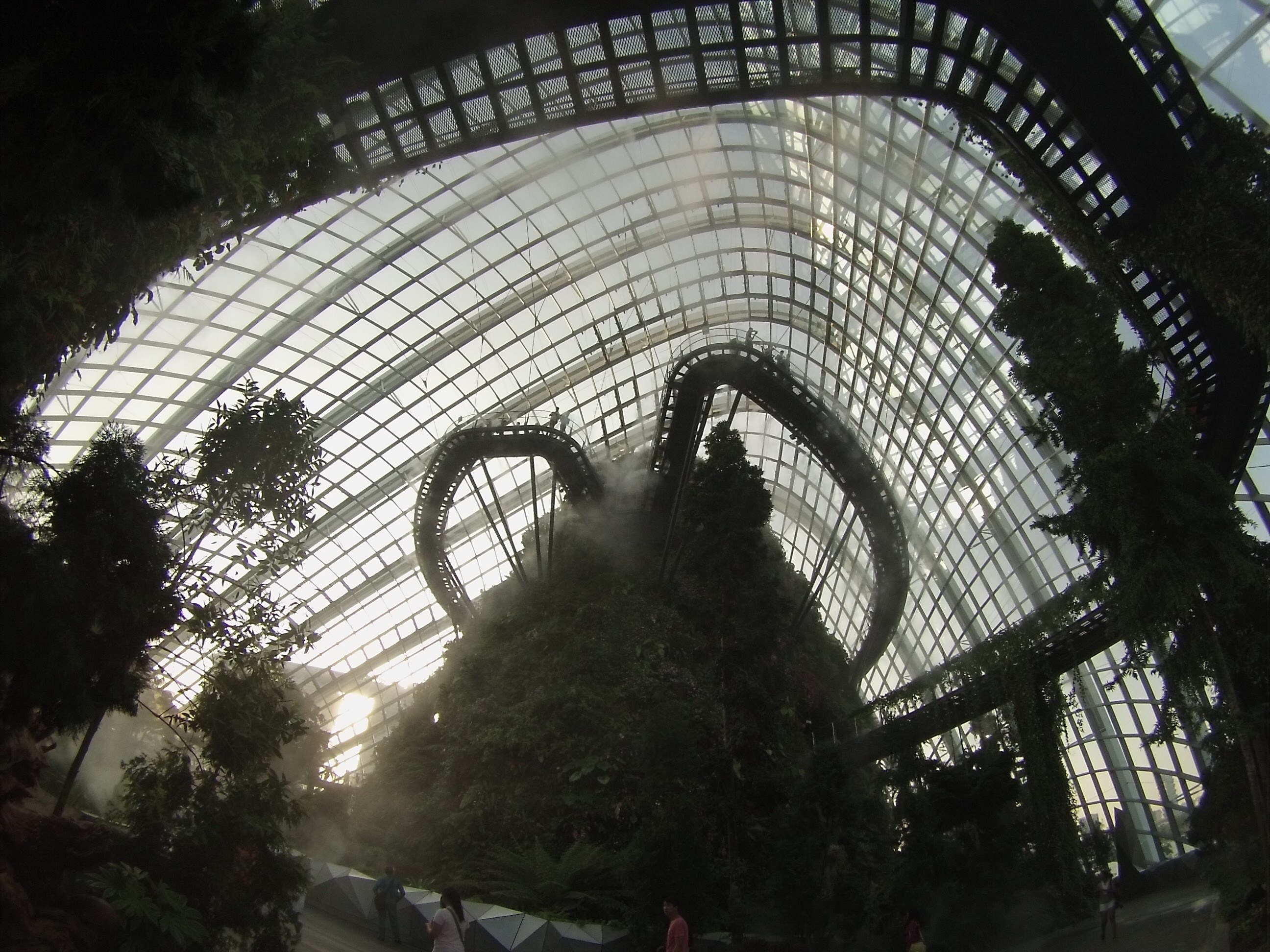 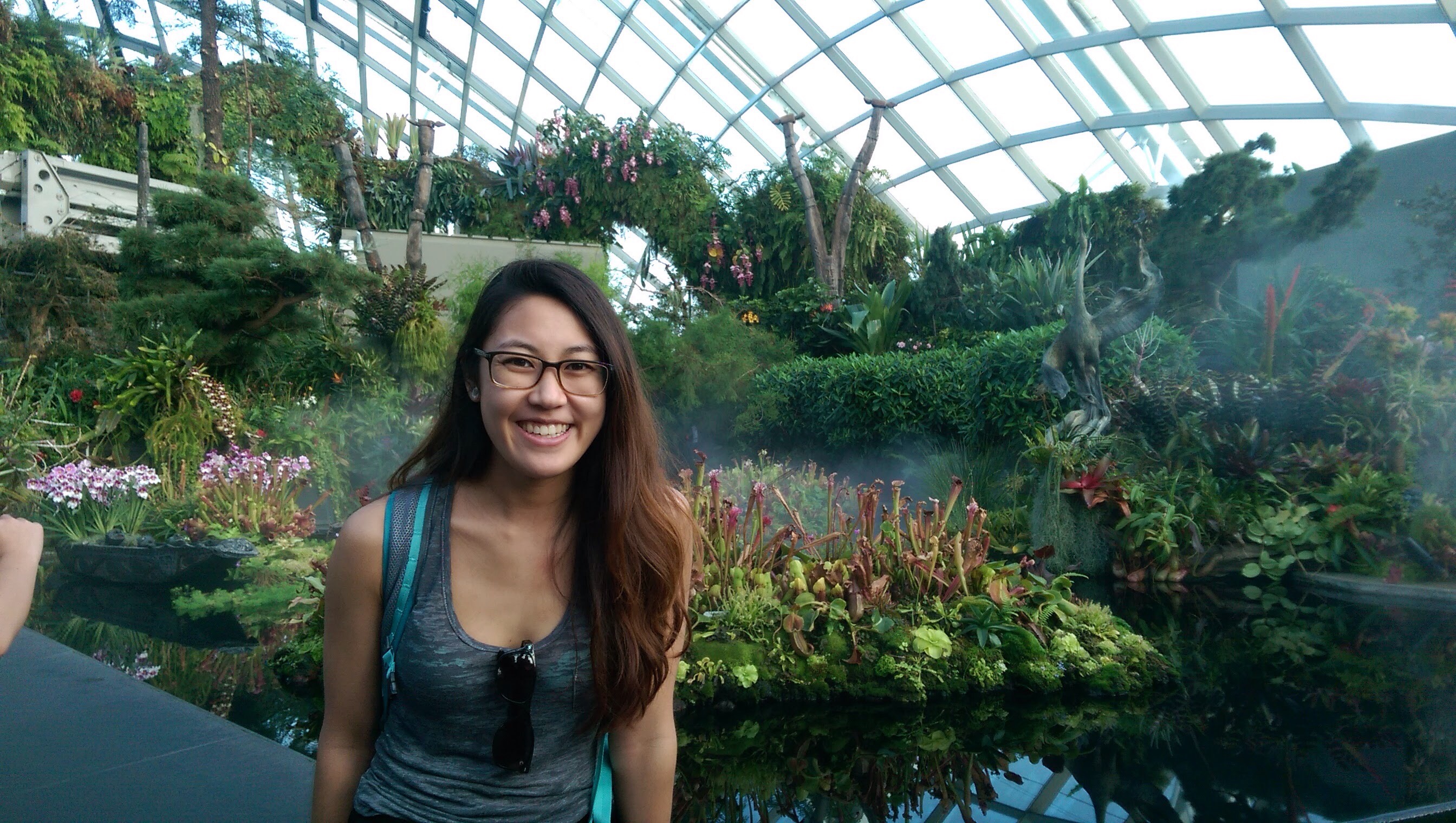 In Cloud Forest you’ll learn about what a forest is like from the top of the canopy to the bottom of the forest floor. Most impressively is the indoor waterfall. Bring your camera!

The other main attraction of the Gardens by the Bay are the Super Trees. At 9pm each night they show a brilliant light show, but come early because the garden is swarmed with tourists all looking to grab the best view. There are some great look out points which will also score you a sweet view of the iconic Marina Bay Hotel.

The next morning we decided to get our moral in check at the Har Paw Villa. Basically a nearly abandoned theme park from 1937 that was built to tell tales of Chinese folk lore and moral parables to influence children to live good lives. The terrifying part is that they used bright and colorful sculpted tableaux that depicted gruesome and explicated scenes of what would happen if you mistreated books.

Read more about Singapore’s must-see theme part to avoid at all costs.

We probably chose the hottest day to walk around mid-day, but everyone speaks so highly of the Botanical Gardens the we couldn’t pass it up. We barely made a dent because it is easy to get lost in such a large beautiful place. Along with all sorts of flowers and fauna, there’s tons of wildlife that can be spotted. I was startled by, what I am convined was a Komodo dragon. It was probably the size of a picnic cooler. When I asked my 10-year old cousin if that was a normal thing, he answered with “I don’t know, but it probably taste delicious fried or grilled.”

We learned how heavy the rain can come down in Singapore on the following day. We got rained in for the better half of a day, but we didn’t want to let that keep us in. We trudged out simply armed with flip flops and an umbrella. Rain gutters were raging and the thunder was louder than elephants at a bowling party. We still pushed on.

Once we were off of the MRT, we were lucky because the rain had stopped just in time for our walk around Little India. Sunday is a great time to come to Little India because all of the Indian workers have the day off so the area is bumpin’. It’s fun to walk down and see the colorful buildings and listen to the smartphone salesmen speak like auctioneers trying to sell the best deal. 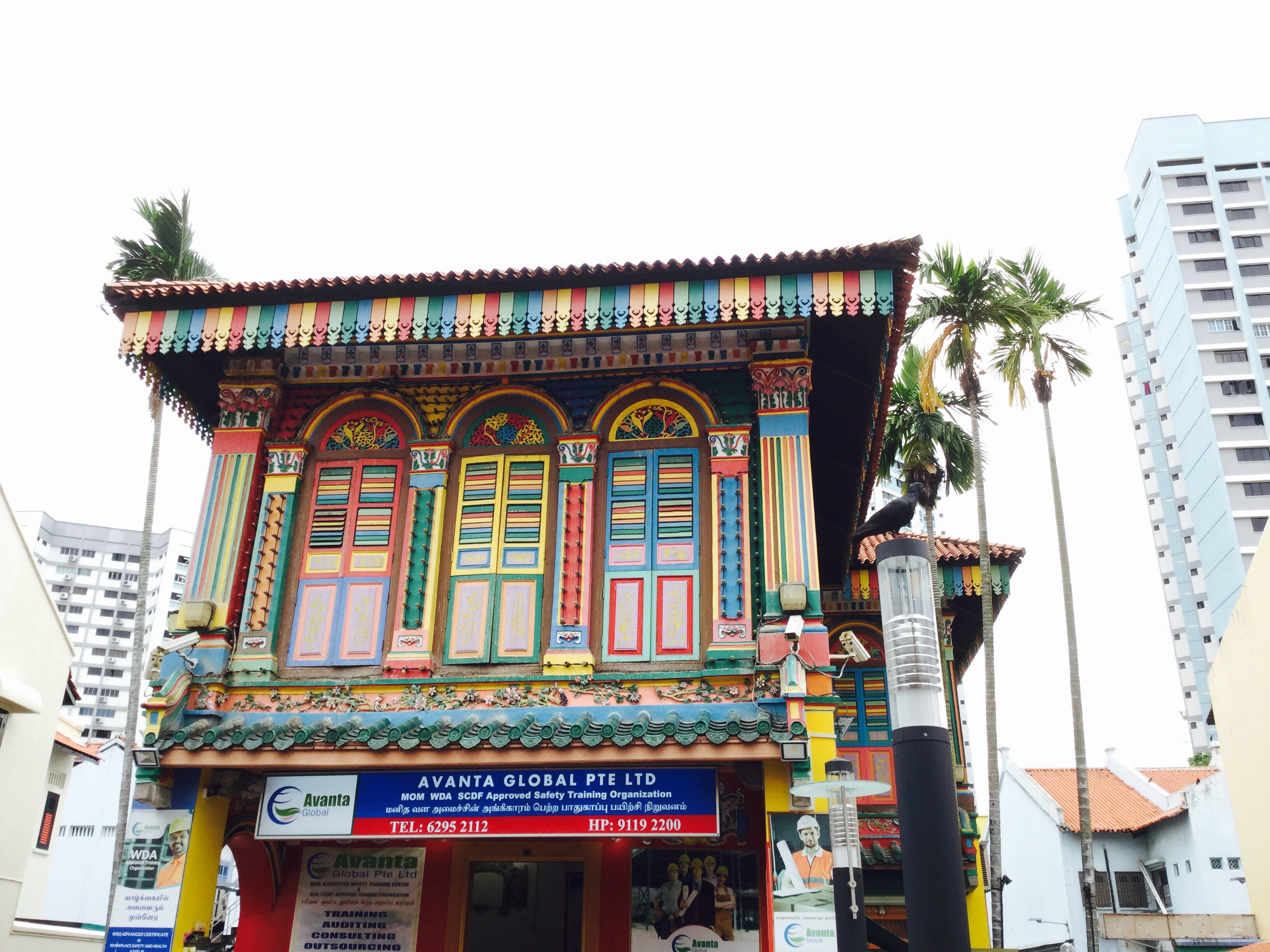 We ended our trip in Singapore right with a visit to Tonkotsu Ramen. 10/10 would recommend. The shop even has a lineup out the door, it’s that good.

Tourist tip: just before you leave Singnapore, return your MRT tourist pass for a $10 rental fee return. So that was $20 extra in our pockets just before heading to Jakarta, Indonesia. Not bad.